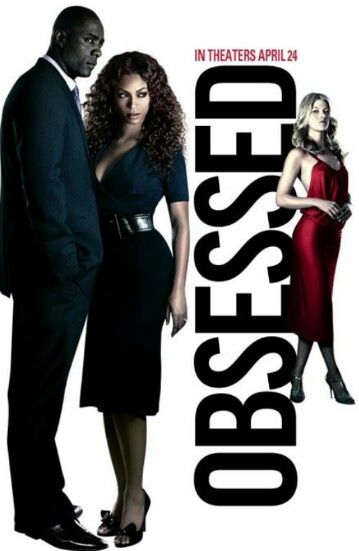 I always knew that Netflix would be my downfall. Being sorely disappointed with Cape Town’s male offerings and all last weeks goings on, I decided I needed a little bit of Idris in my life to restore my faith in the opposite sex. Sigh. Sadly, I have to admit that Idris circa 2009 only served to mess with my fragile mind.  Anyway, let me not digress and get back to the matter at hand, namely my Friday evening bad movie decisions.

Obsessed is a thriller staring Idris Elba and Beyonce, as one of those stunningly beautiful couples that have it all (although, the kid that was cast as their progeny was far too average looking to have these two beauts as parents, if ask me). Anyway, as I said Derek and Sharon aka Idris and Beyonce are living the dream. He has just landed himself a big phat promotion and she is a lady of leisure by the look of things, they’ve just moved into a fancy house in the burbs, drive snazzy cars. What more could a person wish for?

But as always, things are too good to be true. The arrival of a hot young temp at Derek’s office throws a spanner in the works. From the moment she lays eyes on him in the lift, you know that Derek is in for trouble. As the blond bombshell’s crush on Derek develops things go from bad worse. It’s really quite predictable though. She worms her way in by crying on his shoulder about her ex-boyfriend (lightbulb moment: Just realised I’m doing it all wrong. I’ve always talked about my exes in order to tell a guy that I’m not into them! Dumbass). She conveniently ‘bumps into him’ at a bar before the office Christmas party and next thing you know she is having him mix his drinks (rookie mistake Idris) by plying him with dirty martinis in the hope that he’ll lose his inhibitions (sound like a familiar story?). Things escalate very quickly and somehow she is attempting to have her wicked way with him in the gents (oh la la, but you can’t blame her chick for trying now can you?!).

To his credit and despite his past record (back story: turns out his now wife was once an office temp at his work place too), Derek does his best to fight off Lisa’s advances (but props to her for trying, any women who dares to compete with Beyonce has deserved a high five). Call it a women’s intuition if you want but Sharon calls it from the first time she catches wind of the presence of a new female temp in his office.  Although the fact that the couple have a rule about Derek not being allowed to hire women screams trust issues. As you can imagine, as the story progresses Lisa doesn’t take no for an answer becoming something of a stalker (gate crashing work trips, kidnapping babies), etc. Naturally, this also causes lots of stress in their otherwise seemingly perfect marriage.

So, this movie is nothing new. Very much Fatal Attraction-esque story. As I said, its all very predictable. There are probably a million other things you should watch before scraping the bottom of the Netflix barrel. However, do watch it if you a) want to see beautiful people or b) want to see an epic cat fight. If there was ever any doubt before now I really truly pity any person who dares to take on Queen Bey. Also Idris Elba with an American accent is HORRIFIC. Just NO. And while this move is at best basic, it does raise some relevant issues. How far will some psycho biatches go to get what they want? How much trust can one expect to have in their man when there are such unhinged vicious predators around? Do these things ever so black and white (no, not literally!) or is it case of it really taking two to tango?

OK Rinsers, Have you seen Obsessed? Have you been like crazy obsessed with someone? How far did you go to get their attention? Do you cringe when you look back on that phase? Or have you ever had stalker?  How bad did things get? Have you ever had to protect your man/women from some unhinged trash person? What lengths did you go to – claw their eyes out perhaps? And would you ever take on Beyonce in a cat fight? Go wild in the comments section below.