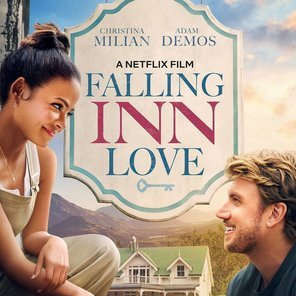 As much I seem to spend my life hating on rom-coms and chick-lit, I’m a glutton for punishment and Netflix knows it that’s why Falling Inn Love (100 points for a clever title right there – NOT!) came up in my recommendations.  And, like with most such films, it was nothing particularly novel. Typical girl meets boy, a comedy of errors ensues, and they live happily ever after. THE END. Well, not quite….

Let me explain. Falling Inn Love is the story of Gabrielle Diaz (played by Christina Milian) who is a typical modern day career woman – highly-successful, incredibly beautiful, fashionable…but she talks in her yoga class and eats donuts, so you can’t help but sort of like her. Not only is she a high-flyer in the design industry but she also had a hot (but dumb) boyfriend on her arm.  That said, once you scratch the surface, you quickly learn that her life isn’t all that peachy. Firstly, she is treated like trash by the men she works with – always being side-lined by members of an old boys network. To make matters worse, her man at home isn’t all that either. Sure, he is somewhat good looking but he isn’t particularly nice. In fact, he is one of those guys I like to call new age sexist fools.

Allow me to go off on a tangent for a second – so back in the day, there were lots of men who were sexist pigs and expected the wifey to stay home and make babies. Sure, that sucked but from my limited experience (movies and books) they were blokey blokes – in that they were the breadwinners and could afford to have wives milling around the house, they could be relied on to fight for their country in a war and you would never be afraid of walking down a dark alley because you know that this big muscle man would throw a punch to defend your honour. Nowadays, there are still guys out there that are as sexist AF, like Gabrielle’s boyfriend Chad, but it’ll work something like this – he’ll insist on ordering a salad for you at a restaurant because god forbid you even look at a carb and then expect you to pay for the whole sorry affair (and his gourmet steak dinner) because he is a broke ass. Tfu Tfu. I really cannot deal. Seriously.  if another guy (who isn’t a doctor) lists needlework as one of his life’s passions (or publicly announces his interest in a yarn festival) I’m putting a bullet to my head. OK, reverse-sexist (apparently, that’s not a thing though) rant over….so let me get back to the story.

So yup, Gabriel has the façade of a good life but in reality she is miserable. Thankfully, the universe offers her a blessing in disguise – in the form of a) a friend who advises her to give Chad an ultimatum – marriage or bust and b) the company she works for going under and her losing her phat job over night. In the meantime, our protagonist enters a ‘Win an Inn’ competition, as you do. And lo and behold, she finds herself the proud owner of a BnB in New Zealand.  Yay! So having dumped her loser boyfriend and having no form of gainful employment, Gabriel decides there is no better time than now to go check out her little investment property.

(Un)fortunately, for Gabrielle, it turns out that you should never trust pictures on the internet as the quaint home she saw online turns out to be pretty derelict and certainly in need of some renovations. But, as a modern independent woman she takes this challenge in her stride and sets out to do a bit of DIY. Despite numerous offers of help from a dashing Kiwi man, she is determined to fix up the place alone. But as most of us urban dwellers/book smart types have probably learnt somewhere along the line this type of dirty work, is easier in theory. After a number of mishaps, and being constantly stalked by a goat she turns to the HOT man for help. And can you blame her? I can testify to the fact that DIY is more fun (and productive) when there is a good-looking man in the picture. As you can probably guess, although Gabriele insists that it is a purely business arrangement, romance ensues.

Beyond the romantic story line there are a few other lessons I think the minds behind this movie wanted us to take note of. I guess a lot of people these days get caught up in the superficial rat race – nice cars, fancy clothes, big money. This story promotes the idea of giving that all up for a simple life (well it’s kind of easy if you get handed your dream business opportunity now, isn’t it?). And it sings the praises of small town life and simple living – making good friends, pursuing the things that matter and bla bla. But it also minimises some of the downsides of village life, as I’ve said in reference to Cape Town – the constant gossip, lack of diversity (the only significant POC seemed to come from abroad although they did have a bunch of Maori kids doing the Haka somewhere in the background) and the fact that everyone knows everyone else business. I’m pretty sure, had she not stumbled across the HOT DIY guy, she’d have exhausted the dating pool very quickly.

Anyways, enough over analyaing something that doesn’t require this much effort. It’s a sweet movie but I would recommend you watch it while chopping vegetables or something similar. It portrays New Zealand in a favourable light, and I’ve always seen it as a place I’d like to visit. Although if you want a more realistic image of what it would be like to move there I suggest take a look at this viral video – about ‘struggling’ SA expats in New Zealand. I also think you might find the clip more entertaining than the movie I just reviewed.

So Rinsers. Have you seen this rom-com? What are your views on modern masculinity? What do you think makes a independent woman – being capable of doing everything yourself or knowing how (or who to do) to get the job done? Is DIY just one of those things that is better to have a man around for? Hate on my old fashioned views in the comments below.