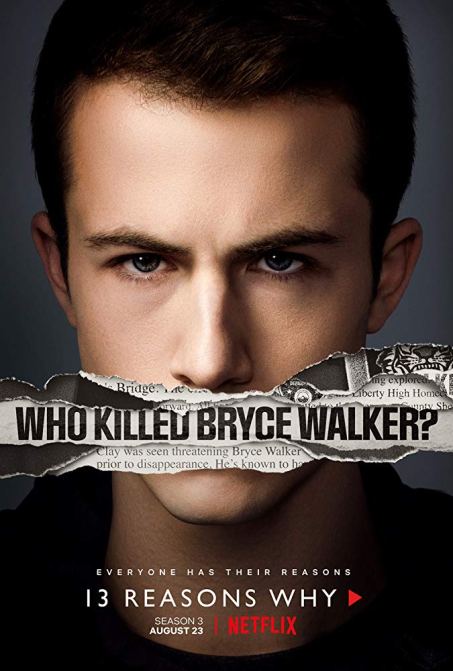 Let me just start by saying that I’m not a quitter. In fact, I usually force myself to finish things I’ve started, if and only if I see any value in them. Unfortunately, I don’t see much value in the third season of 13 Reasons Why (you can also read my reviews of season 1 and season 2), which is why I stopped watching it after 5 episodes. I did read a lovingly crafted season recap, though just to make sure I wasn’t being unfair. Well, I wasn’t.

I don’t feel I need to tell you what this series is about because if you’re reading the review of season 3, you’re most probably familiar with the first two seasons. However, let me just remind you of Bryce, the Monster. Bryce as you surely remember has raped 2 girls, for sure (and we don’t know how many more) and the creators of the TV show spent a lot of screen time showing us how horrible and beyond forgiveness he was. Only that they changed their mind about it in season 3 and all of a sudden everyone keeps reminding us how Bryce is also a human being and capable of change. As much as I agree that having done something terrible doesn’t make you a terrible person, the sudden change of heart in the script seems weird to say the least.
Unfortunately for Bryce, it’s too late for him to change because he’s murdered in season 3 (not a spoiler!). In some weird and confusing timeline narrative of the past and the present we learn slowly who could have killed him and why. Seeing that he’s raped women and hurt a number of people there are of course numerous possibilities of who the the murderer could be.

The main “detectives” in the case are, yet again teenagers. Boring and forever a virgin Clay this time teams up with Ani.
Ani is a daughter of a caretaker of Bryce’s grandfather and lives with Bryce in one house. Her mother is originally from Kenya but she’s spent years living in the UK and that’s where her daughter was brought up. For an undisclosed reasons they both moved to the US. I’m not sure how common it is as an immigration story (I always thought the UK was a pretty nice and welcoming place to live for immigrants but then Brexit happened so who knows). In any case, that’s not my main source of problem with the character. The main thing is that Ani hasn’t been there for the events of the last two seasons and for her to appear out of the blue and give everyone her Yoda-like words of wisdom is quite annoying.
She’s created as a perfectly objective character who isn’t concerned about things such as your past or what people say about you. She only “sees what’s in front of her eyes” and therefore is what we’d all ideally be but aren’t.
She’s also sort of into Clay and he’s definitely into her but for the third time, just like it happened with Hannah and Sheri, he’s being both awkward and unlucky (let’s also not forget Skye!).

As if solving a murder mystery wasn’t enough for teenagers, the characters we know from the last two seasons are busy literally babysitting Tyler. He, after all, wanted to kill everyone during a failed school shooting in the finale of season 2.
Instead of reporting the whole incident to the police, Clay, Toni, Jessica, Alex, Justin and others decide to help him to sort himself out (WHAT?). They send him to a school counsellor to talk about his issues and are nice to him, pretending that the whole taking turns at hanging out after school with Tyler idea isn’t forced.
Now, I don’t know whether you remember being a teenager or know many of them but the last things kids at this age are, is nice and capable of pulling something like this off. Let alone, that it’s simply irresponsible to put the idea of “helping” the shooter to kids who are actually quite likely to deal with an active shooter in their lives.

There are many other decisions of the script writer(s) that are at least questionable. A number of characters disappears entirely with no explanation as of what happened to them (I mean there are supposed to attend the same high school so surely we would at least see them once or twice).
There are also some issues that are explored that are relevant to teenagers these days but discussed very superficially (coming out or steroid use just to quote two). Honestly, they just seem to be there for some additional plot twists and surprises more than for anything else.
It makes me feel sad because season 1 seems to have been made with a different purpose in mind. Apparently, even the controversial suicide scene has been cut by now to ensure that the message was responsible.

When it comes to responsibility in season, 13 Reasons Why try to do all sort of disclaimers, encouraging kids to talk to adults rather than take things in their own hands. There’s even a website with resources they keep advertising 13 Reasons Why Info.
Washing their hands, much? Surely, a better idea would be just to make another season of a series that would teach kids something useful instead of coming up with some crazy overblown scenario just for some additional action and tension.
All in all, it’s a terrible season. Too much incredible drama, too much of everything! Worst of all, it’s not even entertaining guilty pleasure. It’s just boring and annoying.

Have you seen 13 Seasons Why? What was your favorite series when you were a teenager? Do you think there’s a certain social responsibility in making series for teenagers?