Love Is Gone: Break Ups and Divorces in the Age of Social Media 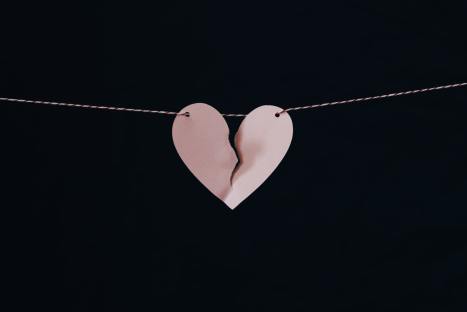 One of the social media fitness trainers I follow has recently decided to end her relatively long marriage. Her viewers have perceived her as a happily married family woman until she’s announced the split. Now, a month later we already see her posting photo shoots with her next beau.
This isn’t to say she’s taken the split lightly or she’s moved on quickly but just to show how little we know about what’s really happening with people we see on social media.
One of the things she’s said in the wake of the said divorce is that her and her husband have been living as flatmates for years but she’s kept a brave face for social media. This just shows how much pressure social media puts not only or public figures but on us all.

#englishrosiee has written about how to approach the issue of announcing a relationship on Facebook in her post F.B.(N.)O. And sure, if it’s a brand new relationship rather be cautious because it’s not so nice to announce a start of a relationship one day and two months later have to share the news about its end. Even if you’re not so sure about your feelings for a relatively long time, you can just keep quiet about it on social media.
It becomes much more complicated, however, to keep it private when a relationship looks serious. After all, your significant other is likely to literally be in your space, if you live together.
Let’s even say, you’ve decided not to share the pictures of the two of you on social media. Guess what? People will tag you on pictures and often, seeing that you’re likely to be out and about with your partner. In other words, you don’t have to be one of the social media attention seekers to end up telling the world that you’re in a relationship.

Of course, a simple solution to that dilemma is just not being on social media at all. As I’ve discussed in my post on how to handle social media, you may simply stop looking for the right room and leave the building by becoming a social media recluse.
There are plenty of resources to see whether you’re dealing with a social networking addiction but if it’s not the case for you, why not to use social media wisely rather than throw the baby out with the bathwater?
Because very often it’s just easier not to share at all than to fight with your temptation on what you share. There’s a theory that some people are abstainers and others moderators so once you figure out for yourself, which one you are, it may be easier to say whether moderate social media use is even an option for you.
Even if it isn’t, most people are simply unwilling to go that far as disappear from social media. What’s more, many people in a relationship don’t feel they want to be someone’s dirty little secret and that doesn’t only include PDA but also being present on social media of their partner.

What’s the solution then for long term couples, seeing that it seems difficult to simply hide the fact that you’re married and/or with kids on social media? Probably the only thing you can do to avoid shaming somewhere down the line is to avoid being smug. Share your happiness but don’t smudge your air of superiority in other people’s faces. Skip posts about how amazing your marriage is, starting with “I see so many couples that [insert what you’re smug about] but for me [brag about how much better your marriage is], how motherhood is an absolute must to keep a family together or hashtags about people who run together/laugh together/work together etc staying together.
You know today what you know today, tomorrow it may turn out that running marathons with your SO hasn’t prevented him or her from banging a coworker or experimenting with tantric sex poses with their yoga teacher.
I’m not saying it to make you obsess about it but rather to point out that relationships and marriages sometimes fail and if yours is doing alright, good for you, but it doesn’t make you a better person.

Apart from not being smug, if you see that your long term relationship or marriage is about to end, you can use a technique that I’ve seen some people using. Namely, what I call, a social media romance withdrawal.
Very often once you hear about someone’s break up/divorce or even see their new relationship announcement on social media when you’ve been sure they are dating someone else, you go through their feed. Then it turns out that they haven’t been posting pictures with their ex for a while.
Whatever you do, it’s good to let people know eventually that you and your partner are no longer together, if you’re active on social media. Why? Because you don’t want to receive messages from not super close friends and acquaintances telling you they saw him/her with someone else, thinking he/she is cheating on you. You also don’t want people gossiping behind your back or making it awkward for you when you’re on a date with your new love prospect.

All of the above, are a good idea if you’re the kind of person who doesn’t like to be vulnerable or who withdraws into themselves when something such sad as a break-up happens to them. That was me in the past and in general I don’t trust people and I find them often judgemental and horrible (I’m working on it!), when shit hits the fan.
There’s something positive to say for vulnerability on social media, though. When an ex-colleague of mine posted on Facebook that her 7 year long relationship ended as her partner not only cheated on her but also announced he wanted to be with that person, good things started to happen to her. All of a sudden women, with whom she hadn’t even been close, started to share their own experiences with her and inviting her for coffee, beer and sugar rush dates as well as parties. All that to make her feel better.
Another acquaintance of mine after a similar announcement ended up getting a friend for life as they bonded over their respective divorce nightmares.
It just shows that not everyone after seeing an announcement of a break up or divorce smiles and starts sending messages to other people to discuss the newest gossip!

Last but not least, if you’re reading it because love is gone in your life and you’re struggling with sharing the bad news on social media, here’s a song for you that helped me in the past to deal with break-ups:

How did you deal with your break-up/divorce on social media? What reactions did you get? Is it even possible to keep your privacy and be active on social media at the same time?