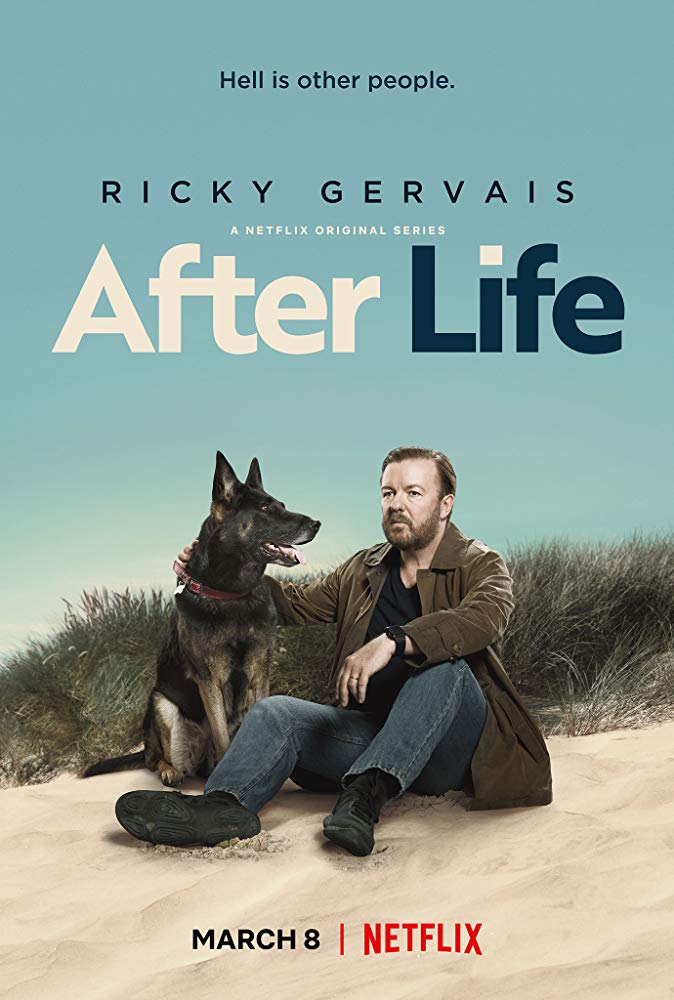 I’ve been lucky with TV shows for a while now. Another gem I’ve found on Netflix is called “After Life” and it’s a British comedy series starring Ricky Gervais. Just like “The Russian Doll” I reviewed for you last week it’s sweet and short. In other words, perfect for binging!

The main character of “After Life”, Tony, loses his wife to cancer. From the recordings she made for him it would seem that he used to be a rather cheerful chap before her death. However, what we see on the screen is not only a grief-stricken fellow but also an angry, mean guy who’s more than happy to end his life. He’s a terribly funny douchebag but still someone you’d never want to have around. His friends and family are more resilient than the audience but keep failing at cheering him. Will Tony stop being a sour puss or will he eventually kill himself? I won’t tell you, you’ll have to watch “After Life” to find out for yourself.

The biggest advantage of the series is, of course, the sense of humour. It’s British and it’s dark but most importantly, it’s hilarious. Ricky Gervais is very convincing as Tony who’s lost his will to live. There’s a number of other characters who are also pleasant enough but he’s an undeniable star of the show. The horrible comments he makes are really funny in this kind of way that makes you feel a bit bad about laughing at them. At the same time, the series manages to lighten things up a bit towards the end, which is not much of a spoiler because TV shows usually do. From a more subjective point of view I love the main character’s unapologetic atheism. (Pssst, you can find out more about why an atheist should not date a team-God member from our Short Guide to Dating and Religion.)

Perhaps more importantly, the series talks about grief after the loss of a loved one. I’m sure that anyone reading it who’s married or in a long-term committed relationship and actually cares about their partner, will be able to empathise with the main character. Of course,  your significant other should not be your everything because it’s just not healthy. However, at the end of the day they’re the person who matters to you the most and the mere thought of losing them can bring tears to your eyes. Watching a character going through such loss unavoidably makes you appreciate what you have more. It also shows you how much a person who’s lost their partner is going through and how unhelpful people who want you to “just snap out of it” are, even if they’re well-meaning.

If I was to criticise anything it’s the very quick ending. It feels almost like it’s been thrown at us when for a number of episodes we see one thing happening and then seemingly out of the blue everything changes… All in all, it’s a very good series. It makes you feel a bit happy and a bit sad, giving you just the right amount of both kinds of emotions. I will certainly give the season 2 a go.

Are you sold or not yet? Here’s the trailer to give you a sample of what to expect:

Have you seen the series? If yes, what do you think about it? If not, are you a fan of British humour? Does “After Life” sound like something you’d like to watch?