Book Review : Everything I Know About Love By Dolly Alderton 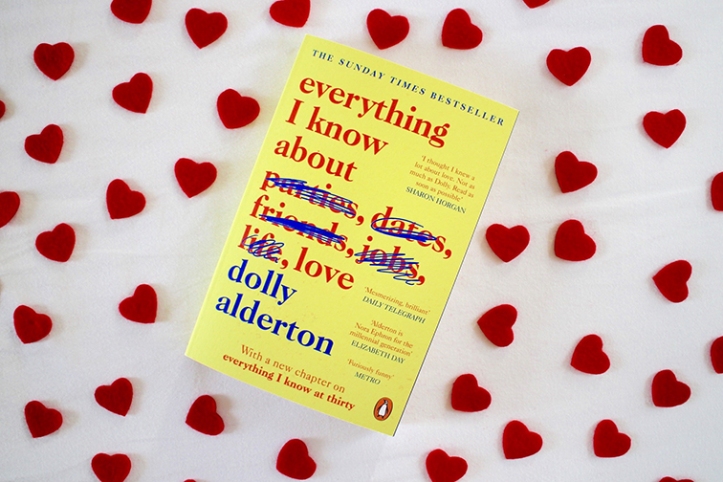 Having recently reactivated my online dating profiles I made a rather scathing comment after being reminded of the limited type of men available to me in the Mother City. I’m afraid the comment is too un-PC, even for this blog (it involved some reference to Brit TV channel) so I’ll leave that to your imagination (and I’ll give you #zlotybaby’s famous 2 rand if you guess right). The friend I was bitching to LOL’d and commented that it was quite refreshing to see how my taste in men/romantic perspectives had changed so dramatically in the space of two years which subsequently made me think of a book I’d read earlier this year.

Following the abrupt end of a lovely winter fling just prior to Valentine’s Day (I have the BEST luck!) I picked up a copy of Everything I Know About Love by Dolly Alderton. It’s just the type of book you need if you’ve just been ceremoniously dumped, done something idiotic or simply don’t feel like you are where you should be in life or are feeling a bit sorry for yourself.  The book is an autobiographical account of how the author’s perspective on love changes as she grows up. I would also go as far as to say it is one of the best (non-intentional) self-help books I’ve ever read!

Basically it takes the reader from those embarrassing school girl crushes that we supposedly have in our teens (I was still acting like a teenager in my 20s – late bloomer and all!), through the madness of student life where you basically fall onto faces that you only have vague recollections of when your friends debrief you on the previous nights events (yep, we’ve all been there!), to your early 20s when you start to feel like you might be finding a purpose in life and getting things on the right track till BOOM the universe bitch slaps you with some god-awful life experiences!

It’s definitely a nice piece of chick-lit which will really have you LOL’ing. It’s an easy read but not in the usual trashy sense. In many ways, this book contains the sort of things many girls would have wished they’d known as a teen. I don’t know about y’all but I often find myself wanting to punch those older, influential people around me in the face for not telling certain things when I was growing up. To give you the most basic of examples, when I was a chubby (bordering on obese) kid growing up, I always thought I’d never get lucky because guys were only into those blond chicks with super model-esque figures. Not true. As I’ve grown up I’ve had first hand experience of how it really is a case of different strokes for different folks with ex-boyfriends feeding me doughnuts telling me they’d dump my skinny ass if I ever start looking like those yoga-bunny types I’ve always aspired to be (see kids, chubby-chasers are real!). Anyway, I’m sure you’ll also find lots of useful bits of information, you may know now but wish you’d known when you were younger!

It’s not all about romantic love, as the title may trick you into believing. It is also about the general ups and downs we experience growing up – partying hard, getting drunk, navigating the job market, learning to stand on your own two feet (and getting knocked down in the process), and having  a few good friends who are there by your side through it all. It’s basically a more real, less glamorous, more British account of Sex and the City. And I’ll pretty much say the same thing about it as said about the Best Exotic Marigold Hotel…it’s funny, but it’s super funny if you are a Brit. I mean there are some references that you’ll pretty much only get if you grew up in Blighty!

So, all in all, it’s just a really lovely, generally hilarious (but sad in some parts) book about getting older and muddling through life. And I think the best thing about the book is that if your feeling like a bit of a dumb-ass whether it’s a case of falling in ‘love’ too quickly or falling down drunk and making a fool of yourself, it’ll make you realise you are not alone in your stupidity. All the idiotic things you’ve done have likely been done before, and as much of a numpty as you might feel about it now, you’ll likely come out the other side just fine. So if you or one of mates needs a bit of a boost or a little reassurance, Dolly Alderton’s Everything I Know About Love, is sure to provide just that. Go read!