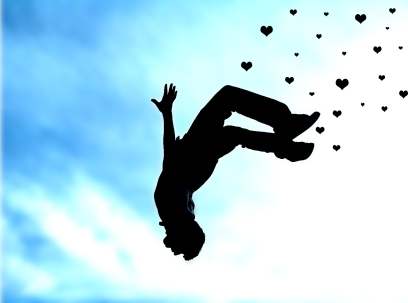 Once upon a time, back in the days when I was young and naive someone told me that you should never say you’ve fallen in love with so-and-so but rather simply say you love them. His reasoning behind this…Well, if you could fall in love with a person then it made it possible to fall out of love with them. Whereas if you simply said you loved them then that statement had more longevity. Hmmm….I’ll admit it was a cute sentiment but even back then (before I became my cynical self) I had to question the logic.

And what triggered this little trip down memory lane? A news headline titled: Unhappy Marriage Not Grounds For Divorce, Supreme Court Rules.  To summarise, there was a court case where 60-something lady, Tini Owens, filed for divorce from her 80-something hubby (age-difference much?), Hugh. According to the press, there were no concrete grounds for divorce as such – no infidelity, no one suddenly discovered God and ran away to join a cult in the Himalayas, and she hadn’t even stumbled across his horrific porno collection (as yet). The only reason Tini gave for wanting to formally end her marriage of 40 years was that she was ‘unhappy’. Hugh refused. The Supreme Court took Hugh’s side. Hmmm….it seems being ‘unhappy’ is not reason enough to end a relationship, according to the LAW. Oh my!

So it seems this was a classic case of Tini simply ‘falling out of love’ with Hugh. Which brings me to the topic of this post: Is it really possible to fall out of love with someone? Is it a legitimate reason for ending a relationship/divorcing, someone? And in reference to the divorce proceedings, what right does a court/another person have to determine what a person can/can not do ensure their own happiness?

How much importance should be placed on ‘happiness’  in a relationship?

So yup, our Tinder generation aka millennials are famous for our fickle nature when it comes to human relationships. When the going gets tough, well it seems we get SWIPING…it’S only a matter of time before we come across someone worth swiping right for! But the thing these golden oldies come from a bygone era when people really did stick things out and weren’t so quick to make rash decisions. Clearly, they spent 40 years together and seeing as they’ve been separated since 2015, I think Tini probably knows her own mind well enough to know whether or not her relationship was serving its purpose or not.

Clearly, ‘happiness’ is a relative term. Everyone’s definition will differ. For one person, their significant other’s cooking isn’t up to scratch so that makes their relationship an ‘unhappy’ one. On the other spectrum, you’ll find those that get beaten up every day and still claim their happy because their violent spouse still puts food on the table. Furthermore, while human relationships are certainly important, I think it’s quite dangerous to risk our personal happiness on these interactions. Sure, a partner should serve to enhance our lives and generally improve them but they shouldn’t be expected to be the sole source of our happiness. There are other aspects of our lives (which to be honest are probably easier to control) that should also play a role in giving a person a happy, fulfilling life – job, hobbies, etc, etc.

Regardless, I think it is really up to each individual to define ‘happiness’ for themselves and decide when they are ready to walk away from a friendship/relationship. Outside parties, including those great legal minds, are entitled to their opinion but it should be just that.

Is it possible to fall out of love with someone?

Moving away from all this happy, clappy chit-chat to the more pressing matter of whether it is possible to jump in and out of love. Hmmm… I suppose, like happiness, this whole concept of love is also interpretation. There are those ‘Ivy Women’ who jump from one relationship to the next without even a few hours of single time in between men and then there are those who  will happily marry their ‘first love’ (aka the first person to give them the time of day) without exploring the other options the world has to offer.

While I don’t think being forever alone or resigning yourself to life of sad spinsterhood or eternal bachelordom aren’t really good things, nor is continually going from one serious relationship to the next. Flings, FWBs, Dating up a Storm and Happily Single periods all serve their purpose – if only to allow the dust to settle from the last encounter and give you a little space for self-reflection. I don’t believe it is possible to be in a constant state of ‘love’ without taking some time out to deal with the heartbreak. (Is it really ‘love’ if you get over it so quickly??? The questions are endless!).

Anyhow, while I’ve always believed dating to be a bit of a numbers game (i.e. you date as many fools as you can till you eventually find one that is a little less foolish!), I don’t think love is. You can’t really put a number on it. Most of us probably only truly love a handful of people in our lifetimes. And maybe the lucky ones (or those with lower standards) end up marrying their first. Speaking from personal experience, I don’t believe we really fall in and out of love. And in reference to that conversation I mentioned at the beginning, I think there are people we date but never really love and when I look back on those encounters I’m happy for the life lessons and blah. blah but I’m pretty indifferent to the person themselves. I couldn’t care less what they are doing or whether they found happily ever after. On the other hand, there are people that I didn’t necessarily fall out of love with but grew apart from/were never truly compatible with but I’d still take a bullet for regardless and would only ever wish the best for.  Maybe you don’t love them anymore but some form of fondness remains.

OK….Rinsers. Clearly, #englishrosiee has more questions than she has answers on this one so shoot. Do you think its possible to fall out of love with a person? Is that a legit reason to end a relationship? And who has the right to an opinion on the state of someone’s relationship and whether or not they have the right to formally/legally end it? Share your thoughts in the comments below.