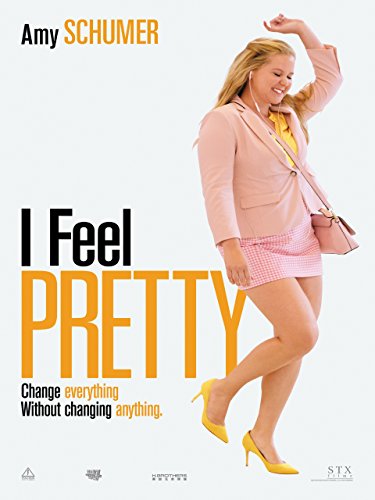 Bless ladies nights made for watching chick flicks you’d never dare to watch on your own! “I Feel Pretty” has a 4.6 IMDB rating at the moment (29th of May) so as you’d expect, it’s not a great movie. Still, it’s actually an enjoyable watch after a long day/week at work when the last thing you want to do is think.

The star of “I Feel Pretty” is Amy Schumer so you immediately know that you should expect a comedy. Her character Renee is far from what the standards of beauty teach us about how to be. She is a bit chubby and her sense of style may be questionable. Most importantly, Renee is very insecure, which makes her unsuccessful in her dating and work life. One day she bumps her head at the gym and all of a sudden starts to think she ticks all the boxes the superficial society imposes on us. Can her own percerption of herself, however skewed, change her life?

The premise is, let’s be honest, quite uncomplicated an unrealistic. So what? It still creates lots of entartaining and cringeworthy moments for the main characters and others. Pehaps the strongest criticism of the movie is that it operates on the basis of very simplistic assumptions about inner and outer beauty, love and success. There will be no groundbreaking enlightments after watching it, unless just like the main character you are convinced that if only you were prettier life would have been completely different  and that its the lack of standard beauty that prevents you from making your dreams come true. Well, sorry for the spoiler but it’s really not all about the looks unless you’re a model (and probably not even then).
The oversimplification doesn’t mean that there’s nothing to say about criticising a society that’s so obsessed with not so much looking good as with perfection. The mainstream culture does promote certain standard of beauty and well being that is difficult to achieve. Perhaps the main character’s fixation of achieving it has more to do with the culture than with herself.

I’d not dare to overanalyze, though. It’s a simple, mildly entertaining comedy, which will keep you amused for most of the time. Towards the end it gets painfully predictable and intellectually offensive, to the point that watching it becomes a struggle. Apart from Amy Schumer who’s quite funny and doesn’t mind making fun of herself, the movie is worth watching for Michelle Williams. She’s really entertaining in the role of a seemingly perfect Avery LeClaire.

To sum up, watch the movie but with a bunch of girlfriends and don’t expect too much.