What Getting a Puppy Taught Me About Potentially Having Children 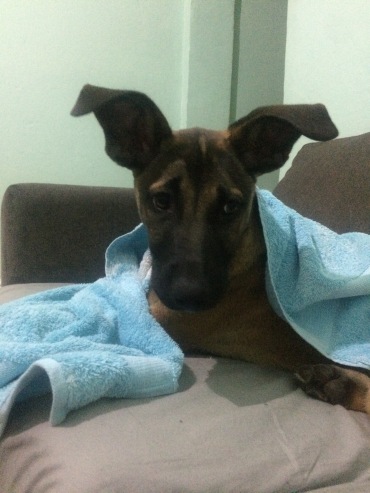 There’s no doubt that having a child is a much bigger deal than having a puppy. I doubt I will ever join the ranks of those, who require to be wished “Happy Mother’s Day” on Mother’s Day just because they have a “fur baby”. A baby is a baby and a puppy is a puppy. I do feel it’s taking away from the actual motherhood to claim they’re the same or even closely comparable. Having said that, I have to admit that the plan of getting the puppy had something to do with me checking how I feel about taking on a much bigger responsibility in the foreseeable future. I’ve found out, not surprisingly, that I’m nowhere close to being ready for the following reasons:

You’d think that puppies aren’t a big deal. You know, you give them their food, water and toys, walk them and play with them from time to time and they pretty much raise themselves. Well, no, or at least no, if you’re aspiring for your puppy not to become the hound of the Baskervilles. You have to spend time to train them not to steal your food so that you can sit down when eating a meal, not to bark at other dogs and humans, not to poo and pee whenever and wherever they feel like it, not to jump and scratch etc In other words, it takes up your free time. Of course, you can also just ignore your puppy and let it do whatever it wants, leaving it on its own in the house for the whole day…but then it’s cruel and why to get a puppy at all? Children definitely require this multiply by a zillion. At this stage of my life I’m not willing to give up any more free time than I already do for the doggo.

2. It’s all about priorities

When you have a child it becomes your priority and it’s understandable. When you get a puppy it’s okay for it not to be your priority. After almost 7 year spent in a foreign countries and millions of problems related to immigration I start to finally see the light at the end of the tunnel workwise. Regardless of what my father-in-law says about the state of my career, I am and always have been career oriented. I need to be happy where I am in life (= professionally) first in order to be a happy mother. At this point in my life having a child would cause me to resent it and that’s not something a child should live with. Thanks to the wonder of contraception we can now decide (if and) when we want to have children to give them the optimal experience of us (because let’s be honest, we’ll fuck them up a bit however hard we try).

3. I take everything seriously and 4. I like to be good at the things I do

My mom says I’ve never been much of a child and I guess it’s true. I’ve always been serious about life. As I commented before in my thoughts before turning 30 I have definitely realised that some things don’t work out and it’s almost never the end of the world. I’m certainly more chilled than I’ve ever been but… it still leaves me quite a serious person. I guess some people just ride life like surfers waves. When dealing with a topic like getting a puppy, they hear this or that from friends, listen to a vet or maybe not even that. In general are chilled and hoping for the best. Not me. I read books and articles for general advice and Google everything to double check. Do you know what kind of peanut butter is good for your puppy and what kind can potentially kill it? Do you know which fruit and vegetables are safe and which can cause potentially long term damage? How much puppy blood on a toy is okay and a sign of healthy teething? Just ask me, I know it ALL now. At the same time I’m not ready to enroll on the course baby101 because I don’t want to just finish it. I want 100% and then to get a Master’s Degree.

4. I struggle with anxiety (in life but also especially now in relation to the dog)

The truth is that since we got the puppy I’ve been spending a lot of time being afraid I will kill it due to my negligence or some terrible mistake. Did you know that it’s okay to give your puppy an apple but not the seeds as they contain cyanide? Yes, the same things that have been used in many terrible instances in human history to get rid of people. I also obsess about the smallest signs of something being wrong. If the dog limps for five minutes I fight with myself not to research 24h vets in the area just yet. When she gets really scared I wonder whether she can die because of it. I worry about her a lot and always think about the worst case scenario. I’m trying to rewire but it’s just like this mental trail that my mind always chooses. I’m really not ready to worry that I will somehow cause some harm to a little human, especially that avoiding all the harm is completely impossible. I either have to find a way to worry less (I’m already off booze and cigarettes, exercise regularly, cut down on caffeine and meditate so don’t recommend me any of that!) or give up and find someone who doesn’t mind giving me a lifetime supply of meds.

Having a dog (let alone having a child) is a massive responsibility because it’s another being that depends on you. If you won’t feed it, it’ll be hungry and eventually die. Don’t show it enough love and affection and it’ll get sad and so on and so forth. All of a sudden making all your plans you have to take this being into account. Sure, you can leave a puppy alone but it’s rather upset when you disappear for too long. It doesn’t understand where you are and wonders whether you’ll ever come back. That leaves you with making plans for your longer outings: getting someone who’ll take care of it, dropping it somewhere where someone will take care of it or considering taking it with you. In any case, you always have to think about it. It’s a responsibility and a child is an even bigger one.

In short, the puppy is great (see the pic above) but I’m not ready for more. I see myself being ready maybe somewhere in 5 years or so. The fearmongers who worry about my biological clock: 1) I’m not planning to have biological children and seeing I’ve decided that around 15 I think I’m unlikely to change my mind and 2) should I decide to have biological children later in life: more and more women successfully do so, so please kindly worry about your own uterus. Oh and to those who think it’s selfish, kindly read #englishrosiee’s post about it.