Flirting, Secret Signs and Making Something Out of Nothing 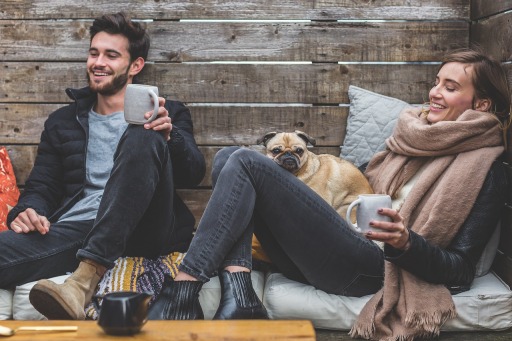 Some people are great with the matters of the heart since they’re teenagers and they can always see through people’s intentions. Most of us, however, need some experience to learn to recognise whether the person we’re interested in is also interested in us. Others seem to never learn.

When I was young I used to develop crushes. I’d observe the person I liked and convince myself that he was also interested in me. He smiled, he said “hi”, he replied to something I said – anything really could be interpreted by me as a sign of him liking me too. I could go on for weeks on one secret sign making up a whole story of our future together in my head. I was probably the biggest dreamer in my friends group but other girls weren’t much different.  We would talk and talk and talk. Nothing would really happen with the boys, though, regardless of our overblown expectations.

Most of us once we gain some experience with people who are actually interested in us, realize that these people don’t send secret signs. The behavior of a person fancying someone is rather obvious, often to other people too. Of course, you have people who are more shy than others but even they manage to send a subtle yet direct message. The lesson here is that if you have to look for secret signs in someone’s behavior, seeing them is most probably just wishful thinking. Realizing that will make you save a lot of your precious time. He/she may be amazing but you need two to tango.

In some parts of the world, making eye contact with someone of opposite sex is pretty much expressing that you want to marry them. This isn’t the case in the Western world. Looking at someone may mean that you appreciate their physical beauty, that you find them repulsive or that you like their pants. On its own it’s truly meaningless and so is flirting. Whether someone is making small talk or actually flirting with you, it means that he or she is potentially interested in you in some way. However, even someone who flirts with you every time he sees you isn’t making you a promise. Being interested is one thing, being interested enough to actually make a move is another. Unless the person makes a move or reacts positively to you making a move and you two end up on a date, there’s nothing to write home about. Sure, it’s irritating if someone you fancy is not truly following up but you should take such behaviors at face value. You guys are flirting and that’s it. Enjoy it for what it is. There’s no promise than anything else will come out of it so don’t get hang up on it.

Making Something Out of Nothing

There’s this saying in Polish that translates into “When there’s no fish, a crab is a fish”. It applies perfectly here. Part of the reason why my female friends and I, as teenagers, would make something out of nothing was that we didn’t know many boys. We went to a predominantly female school and even if we increased our chances of meeting men by attending karate classes, after eliminating all the guys who were our fathers’ age and/or married, guys our age with girlfriends, the undatable ones and the crushes of our friends there still weren’t many men left! In other words, if you liked a boy and there were some chances that he would like you back, fantasising about him actually didn’t seem like a terrible idea. The difference between this situation and an adult woman describing to everyone a guy at the gym who smiles at her as dating potential, is massive. We had not much choice! Adult men and women have so many opportunities to meet other people in our modern world. There’s work, there’s social life, there are limitless activities no one will judge you for taking up on your own, clubs related to your hobbies, let alone online ways to make friends such as MeetUp or regular Internet dating. There’s honestly no excuse these days not to give oneself enough possibilities to stay cool as a cucumber till something is really happening (as opposed to: in our heads)!

To sum up, secret signs are good for teenage crushes and not for adults. Flirting is just flirting so hold on with telling everyone and their dog about your new potential relationship because it’s far-fetched and embarrassing. Last but not least, make sure your social life is busy enough to give you enough opportunities not to turn into a crazy stalker just because someone smiled at you.

Do you know people who as adults still can’t see clearly in terms of opposite sex? Are you guilty of too much wishful thinking?