Mismatched Couples : Dating Out of Your League 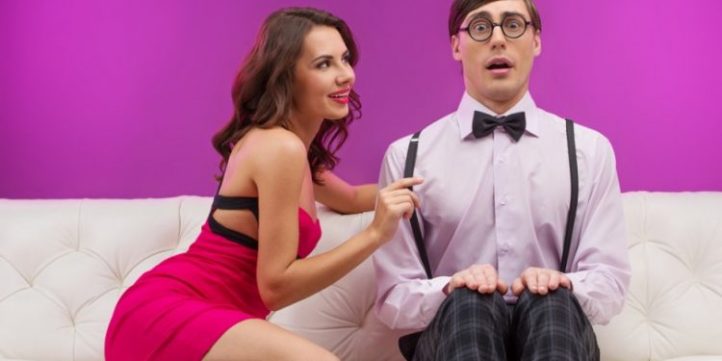 Once upon a time I had my little heart smashed to pieces by a guy that no-one could deny was good looker. For a long time I convinced myself that the reason the relationship was doomed for failure from the get go (slight exaggeration here) was because I was shooting way way way our of my league. How the hell did a chubby book-ish girl with a crooked nose and wild hair ever think she could hold down a hottie with a six pack and eyes that could hypnotize any hot blooded female. Well, turns out she and did and that things can actually fall apart for more complex reasons. Regardless of the facts, reeling from the aftermath of an epic break-up I vowed never to date a pretty boy ever again, my weak mind’s strange logic told me that the only way to ever succeed in finding happily ever after was to play it safe – basically stick to the ugly ones! And you guessed it, this led to a whole host of other issues. Let’s put it this way , if love was really governed by such a simple formula well we’d see so many more people winning at it!

Whether or not you relate to my personal anecdote, we’ve probably all had some experience with this notion of ‘leagues’ in dating. How many times have you heard someone comment that a girl is only dating an old guy for his money? Or question why a clever chick with everything going for her is dating ( read:financially and emotionally supporting) a deadbeat mummy’s boy who considers himself an ‘artist’ (sure, an expert in the art of sitting on his fat ass more like) ? . To some extent, we are all part of this somewhat high-school-esque system that ranks people according to a bunch of random criteria such as looks, academic achievements, money, social status, etc. And despite this there are so many of us that end up smashing the hierarchy and dating out of our league anyway.

Much of the time these so-called ‘leagues’ that we choose to shoot out of are socially manufactured concepts that somehow manage to infiltrate our little heads from the moment we start to notice the opposite sex, or maybe even before that.  These dating/social leagues are very subjective and just like sports leagues they are open to change. At some point in time, those that were once at the top of their game are bound to get replaced by someone prettier/cleverer/richer or with bigger muscles. You may find that that sometimes a strange life event can force even the best of people to be relegated into lower division. Just like that the tables can turn. Overnight an ugly duckling can turn into a swan/flamingo or a pauper could win big on the lotto.

And as much as these ‘leagues’ that the world forces us to place ourselves and others in are artificially engineered, the fact that we choose to fixate on such superficial things probably says more about our own issues and insecurities than anything else. The thought of asking the stunning chick with the perfect hair out on a date may make that geeky guy pewk in his mouth a little, but the fact is you never know a persons back story. Maybe she’s had a hard time in life and only ever dated horrible men that have taken advantage of her and the only thing she wants is a nice guy who won’t screw around. Perhaps being approached by the dude with a six pack leaves Miss Piggy (who is usually pretty eloquent) lost for words and wondering whether all the steroids have made him lose his mind. But maybe the reality is that despite the beautiful exterior he is in fact not that much of a prized commodity and even if he is maybe all the women throwing themselves at him just didn’t offer him the right kind of sparkles. Remember Mr Darcy was beautiful, posh, over-achiever and he still went for Bridget Jones. So, go figure.

Different people value and want different things. You may be the brightest, most beautiful girl in the world and guy may not want you because you just can’t quote the bible on cue. Everyone has their own deal breakers. Sure, in many ways the dating scene is a bit of a market place and we do need to take certain steps to make ourselves a viable option for a person. I mean turning up to a date dressed in rags or having nothing to talk about probably won’t get you very far. But this idiotic thing that many of us do in boxing ourselves into leagues and determining people’s values according to certain criteria probably does our prospects of finding our Prince/Princess Charming much good either.

So it maybe easier said than done but don’t let society’s opinion (or worse, your own opinion) another person being out of your league stop you from taking a risk and smashing up those social barriers. Some of the most solid couples in the world are probably totally mismatched. And perhaps it is in fact that very mismatch that makes them such a formidable team. So yep, when it comes comes to dating out of your league as it were, I’d always say take the chance (honestly, sticking to the ‘ugly’ ones will only made me miserable!). Maybe fighting the system won’t always reap rewards but it’s guaranteed to provide you with an epic adventure, something that playing safe certainly won’t do. And just maybe that hottie or that brainiac that you are totally in awe of sees something in you that the fucktards that went before were too dense to realise. So, throw caution to the wind and always aim high.