Review: We Should All Be Feminists by Chimamanda Ngozi Adichie 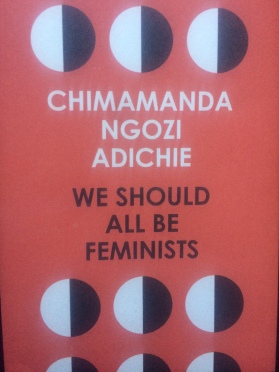 It’s National Women’s Day in South Africa today! There’s no better way to celebrate such an occasion than to ponder on the situation of women these days. That’s why I decided to review the essay “We Should All Be Feminists” published in a book form, summarizing how much there’s still to be done about gender equality. I’m so happy I’ve found this little gem in a bookstore. The book consists of not even 50 pages and can be easily read in a lunch break. Don’t underestimate its content, though. It really is worth reading.

Adichie starts her essay by enumerating misconceptions about feminism. Many people consider feminists to be women who are unhappy because they can’t find a husband and that they hate men. They’re also believed not to wear make up, shave or wear high heels (which is also something that some feminists consider to be the “proper” way to be a feminist). Last but not least, feminism is considered a “Western” idea and therefore an “un-African” one. This is the reason why Adichie half-jokingly proclaimed herself to be a “Happy African Feminist Who Does Not Hate Men And Who Likes To Wear Lip Gloss And High Heels For Herself And Not For Men”. You know, just to please everyone. There are indeed many expectations towards what a feminist should or shouldn’t be, when in reality no qualifications are required to support gender equality.

Expectations towards feminists are not dissimilar to those towards women in general. As Adiche points out, society spends so much time “teaching girls to worry about what boys think of them”. Girls are not supposed to be angry and tough but pleasant and agreeable. Women are trained how to be in order to please men (you talk too much, no one wants women who talk too much, my father would say) or how not to be to avoid upsetting them (you should never tell anyone that you’ve been with an Arabic man or no one would want you, my mom would threaten during her sexist/racist rants).

It’s not only girls who are taught wrong ideas. Boys suffer as well. They’re meant to be “tough”, they’re denied the right to fear and to be vulnerable. They’re taught that their value is measured by money they have. Masculinity is very strongly associated with money. It’s not only men who pay for women, already boys are taught that this is the right way. Because of such conditioning male egos get bigger (but are fragile) and consequently females are trained to “get smaller” in order to please such egos.

Women are meant to compromise in a lot of different ways. They’re expected to keep their virginity, while there are no such requirements for boys. Women are not allowed to express their own desire but they’re supposed to embrace the male animalistic nature. It’s up to a girl to cover herself up and not to tempt men. If she gets sexually assaulted, she’s the one to blame. After all, boys will be boys. It’s not only in terms of male attentions that women have to be careful with what to wear. They also need to think carefully about their looks in a professional context. They need to dress in a certain way to be taken seriously, while the freedom of being a man is to look as good as he wants to without having to worry about it.

We also teach girls to make marriage their aspiration, while boys aren’t taught the same. Women are subjected to a lot of pressure to be in a relationship. Whether it’s happy or not remains irrelevant. It is not easy to just free oneself from such expectations, as Adiche rightly points out, humans are social beings after all. That is why if we normalize certain things, there’s a point where they become “natural” (an issue upon which I touched in my yesterday’s post). Seeing only men in position of power for instance, makes us expect only men to be there.

Last but not least, Adiche explains that feminism is a part of the human rights movement but also a separate issue that needs to has its own voice due to its focus on upliftment of women to achieve gender equality. If we really want to see the change in the world, we have to question the status quo. To see a shift in the perception of femininity and masculinity we need to change what we put in head of new generations.