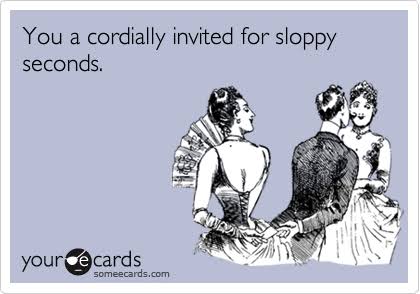 The term sloppy seconds can have a very vulgar meaning of having sex with someone (usually a woman) who has just had sex with someone else. In the general dating terminology, however, it is used to describe a person you dated who someone else dates after you (usually a friend or an acquaintance). Inspired by the film “Miss Peregrine’s House for Peculiar Children” where a guy takes sloppy seconds after his grandfather (!), I decided to write a post about the matter.

You’d think that thanks to Internet dating the circle of people that are potential matches in the dating pool significantly increases. Maybe so, in a place like New York but Cape Town is a very small and divided world that despite its potential variety limits you to a finite number of possible partners. From my perspective of a married woman, it translates into bumping into into my husband’s and mine exes which is unpleasant as it is. Imagine, however, how annoying it would be to have someone in your immediate circle dating your ex and therefore taking sloppy seconds after you or to be a sloppy second yourself and be constantly around your ex. Doesn’t sound amazing!

The first question with dating someone who used to date someone close to us, is whether it’ll hurt our friend. I know that people these days love to pretend how MATURE they are and how much they don’t care about having their ex around or even are totally fine double dating (which can be true but from my experience only when the relationship didn’t end up in people being hurt and drama or when a long time has passed). I also know that most of these people prefer to cry in the pillow than to admit that something is hurting them. This is precisely why if we ask someone whether it’s okay if we go out with their ex, they may try to put a brave face on and say yes. In other words, even if someone tells us it’s okay, we should try to figure out whether it really is and not just conveniently accept the answer.

It’s up to a person that’s going after the sloppy seconds to weight the pros and cons. If we’re really into someone we may be prone to go for it and be willing to accept the consequences if our friend decided at some point he or she is actually not okay with us dating their ex. On the other hand, if we know that the person caused our friend a lot of pain and we’re just attracted to them, maybe a better idea is just to let it go. I’m referring here to a relationship which ended. What is the right thing to do if it’s still on and we’re into someone’s partner?

As a default, I don’t think it’s decent to show interest in a partner of our friend, be it a short or long relationship. If we’re interested in them before the break-up happens and showing it, less or more subconsciously trying to lure the person out of a relationship, we’re not being loyal to our friend and we become a frenemy. We cannot foresee where the relationship will go and a taken person is a taken person. We would like others to respect such boundaries so we should respect them ourselves. If a break-up does happen it’s also not the nicest thing to do to pat our heartbroken friend’s back with one hand and with the other stroke her ex’s hair (or something else wink wink) trying to start a relation with him or her. Even if the loyalty argument isn’t convincing, there’s always the self-preservation instinct one shouldn’t forget. Namely, a guy or girl just out of a serious relationship may not be the best dating material and we may end up losing a friend and respect for ourselves over a hook-up.

To sum up, there’s no good answer to a question on whether it’s okay to date your friend’s ex. I think they should be untouchable in principle but I’m aware that there are various situations. If a friend just had a fling with someone and we’re madly in love with the person, I don’t think it’s comparable to a scenario when someone is trying to destroy another person’s marriage. In the latter case, the chances are that the partner so easily lured out of one relationship will do the same to his next better half.

Dear Rinsers, what do you think? Is it okay to take sloppy seconds? Are our friends exes untouchable? The comments section is all yours!