“Women Who Love Too Much” by Robin Norwood 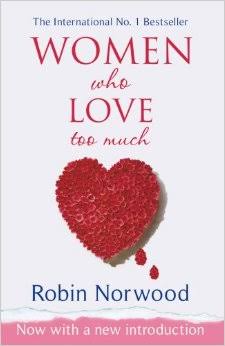 “Women Who Love Too Much” is an often reprinted book for women, which was initially published over 25 years ago. The author is a therapist who specializes in the problem of “loving too much” and who used to have this problem herself.

Who is this book for? For those stuck in bad relationships who keep having drama in their love lives. Most women with this problem come from what Norwood, somewhat harshly, calls “dysfunctional families”. I think that this label is quite unfortunate as no one wants to think about their family in this way. What the author really means by the term is “unhealthy”. The problem doesn’t only appear in families with domestic and substance abuse present. It’s enough that a mother is jealous of her daughter, overly controlling or harsh and critical for it to be a problem to a child’s emotional development. Similarly, when a father is emotionally or physically absent or always striving to be “funny” but actually coming off as cruel it’s also unhealthy for a developing ego.
All of the above, separately or combined, program a child to start believing that it isn’t worth of love, that’s there’s something internally wrong with it and it needs to sacrifice to be loved as no one will love it for what it is. Needless to say such a child as a result thinks very little of itself.

Norwood explains how such early developed traits live on as  a child becomes a woman. She describes numerous examples from her practice to show how these females behave as adults, reproducing the patterns of their childhood in adult love life. To some of them the reader will be able to relate to other not really, but it’s good to read the whole book to understand the phenomenon fully. In short, women who love too much would do anything for a man just to be loved. The men they choose give them the same treatment they received in childhood – they need to perform to be loved.
Such women aren’t interested in people who are nurturing and accepting. They consider them boring. Instead they use sex and their looks as a tool to get a “bad” guy as they don’t feel there’s anything more in them that could be appreciated. They desperately strive to be in a relationship and to avoid rejection but in reality are terrified of true intimacy.

The book is full of interesting thoughts. It explains that true love isn’t about being hurt and great make-up sex (which comes as a surprise to many) but rather about the companionship and the feeling of safety. It shows how culture teaches us to consider bad relationships as “true love” and misread strong attraction as a sign of a meaningful bond. It also discusses the overly present sexism which makes us believe that woman should sacrifice and tolerate whatever her man does in order to get him and keep him.

My only problem with a book is that it may help a person self-diagnose and look for help elsewhere but it gives little actual guidance on how one can get sorted. “Women Who Love Too Much” isn’t really a self-help book as it’s advertised on the cover.
It also reminds me of a book formerly reviewed by #englishrosiee “Why Men Love Bitches” but the latter is much more superficial. It explains to you how to behave without getting stuck in certain scenarios but doesn’t look into reasons of why you’re interested to get into bad relationship at the first place. “Women Who Love Too Much” is much better as it looks at the issues behind the behaviours rather than at the behaviours themselves.

Who would I recommend this book to? To anyone who feels they may have an issue with men. It’s difficult to admit these things to yourself and even more challenging to actually address them. I can just tell you from my own experience that they won’t disappear on their own and you’ll never find the right man to help you feel loved and fulfilled. You have to start loving yourself and admit your self worth before you can accept someone’s love and love them back. This book may be your first step on the way to do so.

Now it’s time for your opinion, Dear Rinsers! Do you struggle in your love life? Did you used to struggle but eventually managed to sort yourself out? Tell us your story.