“Wood Job” – Love and Life in the Rural Japan 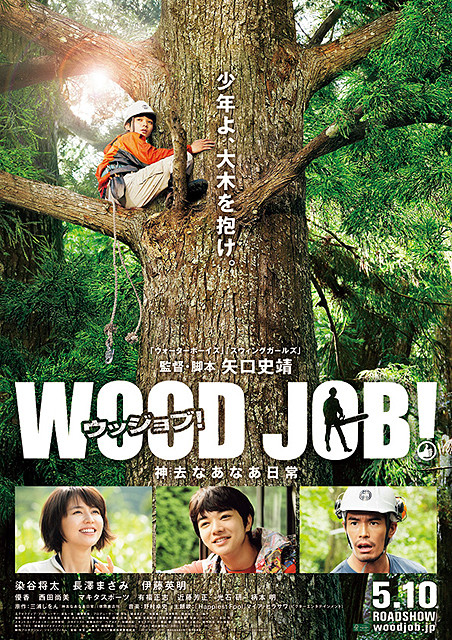 Not many people knew about it, because the Japanese embassy doesn’t seem to be great with social media, but there was a Japanese film festival in Cinema Nouveau in Waterfront last weekend. As film festivals in Cape Town don’t happen at all and then happen all at once, I only managed to see one Japanese movie (the tickets were free of charge) as I had my pre arrangements for Shnit (Short film festival). My choice was to see “Wood Job” as it had quite a good rating on the ultimate source of film reference the Polish IMDb, Filmweb.

Yuki, a young man who doesn’t seem to have a goal in life fails his matric exam. His girlfriend doesn’t want to date a loser and suggests they have a break. He goes out to get drunk with his friends and relieve the pain. They all know that they’re going to continue their education at university so their presence is depressing rather than helpful. Clueless about what to do the following year he lets destiny make a choice for him. A pretty face of Naoki, advertising a lumberjack training on a leaflet ,lures the city man into the wild woods.

“Wood Job” is a coming of age story in which the tough life of a lumberjack teaches a man to respect nature, life and others. Of course, there’s the lady from the advertising leaflet involved too. Unfortunately, the story is quite typical and there’s a lot of predictability. The overly sentimental vision of life in a remote village, where “true values still count” is also quite cliche.

Nevertheless, the movie is an interesting watch mostly because it’s set in Japan and gives a peek into a world we know little about. Love hotels, fertility rituals, condoms – it would seem that love in Japan is very sexual and naturalistic. There’s also a lot of sex related humor. The sexualization, however, is only superficial as everything is suggested but there are no actual love scenes on the screen. The hottest it gets are quick martial pecks.

The feature is also not deprived of humour which isn’t a surprise in the case of a comedy. Even though the jokes are not the most sophisticated it’s still difficult not to laugh. The humor along with its thick layer of sugar coating would suggest that the film isn’t to be taken seriously. Unfortunately, it seems like the director’s intention was to send a message and according to me the delivery failed. Love is no better in the woods because there’s no choice in terms of partners and you just have to settle. Lack of diversity may be a blessing if you’re lucky but may as well turn out to be a curse. People are always people and they are not any better because they live in a village. Life isn’t that simple and both cities and villages have their disadvantages.

To sum up, “Wood Job” is an interesting watch but it’s a bit just too sweet and just a bit too simpleminded.