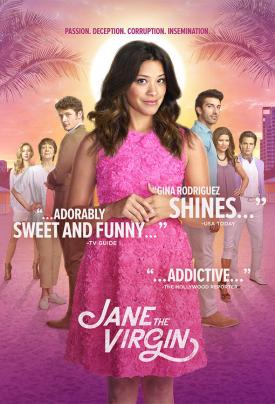 As a result of all the stuff I’ve been blogging about here, Google (in its rather stalker-ish way) felt that Jane the Virgin was something that I would be interested in. And Google being the rather clever one, was right as I quickly got my hands on the first season of the show.

Jane the Virgin is a comedy-drama series (styled like telenovela because, you know, Jane is Latino and all) which follows the story of a 23 year old virgin who is accidentally impregnated via artificial insemination. It has all the elements necessary to keep viewers (even those with a short attention span when it comes to TV) entertained; multiple romances, family politics and a little bit of crime drama thrown in for good measure. It also touched on a number of the important issues we’ve been discussing on RinseBeforeUse. Everything from good girls chasing bad boys and kicking the wholesome ones to the kerb, cheating and break-ups to interracial romance and panty dropping.

While it’s not the most intellectually stimulating entertainment, it’s pretty good. The show offers a slightly far-fetched but lighthearted perspective on some serious issues. I did feel, however, that it glamourised the whole issue of celibacy a bit much. Jane is portrayed as a level-headed girl who has made a promise to her rather fanatically religious grandmother to not follow in the footsteps of her rather crazy, promiscuous (but at the same time good-hearted) mother who went and got herself pregnant with Jane is her teens.

Sadly, I know a fair few real-life 30 something virgins (not to be mistaken with the sad spinsters who at this stage have basically regained their virginity) and they are really nothing like Jane. While slightly awkward and ditsy at times, Jane is good looking, confident and glamourous (I have to admit I am pretty envious of her wardrobe) and she has not one but two handsome guys fighting for her affection. For Jane remaining a virgin is conscious choice, but it doesn’t mean she is totally innocent (she writes sexy letters to man which is basically an old-fashioned form of sexting). Furthermore, her long-term boyfriend/fiancé as well as her baby daddy/bad boy are so in love with her that they hardly even try to push the boundaries and convince her to give them some goodies (hmmm…do such creatures really exist?).

In real life, 30-something virgins are often not so, necessarily out of choice but, because they’ve learnt from an early age that the opposite sex are not to be trusted and therefore are incapable of forming even the most basic kind of relationship with a man, that might one day allow things to progress to the bedroom. Also, as harsh as it may sound, those that haven’t been laid by a certain age may possibly have serious self-esteem issues, that need to be addressed professionally. And it’s one thing being a late bloomer but I do wonder whether after a certain age your expectations become unreasonably high and you just end up giving up on the idea of bedroom acrobatics altogether.

Anyway, I am getting way ahead of myself and over-analysing something that needs to be enjoyed for what it is, a good LOL. And on the bright side, if by glamourizing celibacy and showing the world that being a virgin can be somewhat cool, maybe just maybe this shows like Jane The Virgin can influence teenagers not to be so rampant, then maybe we can start to reduce unwanted progeny and its associated issues. Let me put an end to my unnecessary ranting now and go watch a few more episodes.

Now over to you our dearest Rinsers. Let us know your thoughts on holding onto the V-Card well into your late 20s/30s in the comments below.