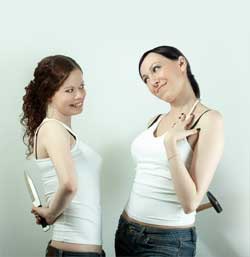 Dating is a difficult thing as it is. We have to find a person we’re interested in, the person needs to be interested in us back and then we have to make this thing called a relationship work as well. The existence of frenemies, which means people who pretend to be our friends but actually are our rivals and will screw us over when it’s convenient for them, only makes the whole business more difficult.

Rivalry for a man can ruin a friendship between women. Actually, if they want the same guy and to save the friendship it’s better to give up the chase for him altogether. For when one gets the man and the other doesn’t, the one who didn’t end up with the man is rarely truly fine with it (depends on the strength of feelings for him, of course). After such an experience her self-esteem may get weaker and her hurt ego may stop her from acting in her friend’s (and her relationship’s) best interest. The result of this may be nothing (as the frenemy’s belief that mingling with someone’s boyfriend is morally wrong is stronger than the pain of a hurt ego), may be some flirtation (after all, HE is the one who has a girlfriend and HE must behave) or a full on plan to get the guy. Only in the first case scenario and when the one who “lost” can eventually get over the fact and understand that it’s all about being or not being a match with a guy and not “wining” and “losing”, can the friendship be saved (and it won’t hurt if the other one meets someone too). This is what I’d call a circumstantial frenemy, in other words, the friendship was genuine till the circumstances questioned it.

As I’m sure you’ve figured out, I think there’s also another sort of frenemy and this is someone who has never been your friend at the first place. Be it your guy, your achievements, or your social life (possibly all of the above mentioned) she is actually jealous of you as the default. She secretly dislikes you, thinks you don’t deserve what you have (but is your friend out of convenience) and feels better than you in all respects. She’ll wait for the moment when you’re weak and will use the knowledge she has about you against you. She’ll try to take what she thinks she deserves anyway, even if she actually doesn’t want it, just to prove to you who’s truly “the better” one.

Now, that I’m older and wiser, I can only recommend you, Dear Readers not to get involved in any sort of similar scenarios, whichever side you find yourself on. If you can’t genuinely be friends with someone or you feel they don’t have your best interest at heart just trust your gut feelings and withdraw. There’s no point in getting involved in competitions that regardless of the result end up with having two bitter and hurt losers.