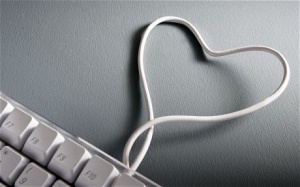 We pretty much live “on the web”. We do Facebook, we google, we Instagram. It was inevitable for love and dating to go online too. According to studies, one third of American marriages start online. Nevertheless, Cape Town seems to be still somehow conservative about this way of meeting romantic partners.

Many young people don’t want to be restricted in their lives by possibility of meeting someone with common interests in real life and want to increase their chances by joining Internet communities of their choice. Couchsurfing (travelers community), internations (expat community) or meet up (for those wanting to meet people with similar interests of all sorts) are flourishing. The fact is that many of the users are single and even though they claim to be only looking for friends they are, in fact, looking for partners, even if temporary ones (as in case of the hook-up seekers). Why are they not open about it? Since there seems to be a certain stigma related to active looking for a partner (being desperate, needy and dependent), which is a reason why many people pretend they’re not (and that being single makes them shit with rainbows). Those who judge tend to disregard the difference between wanting a partner (and a certain kind of a partner too) and needing a partner (and anyone will do, and if they’re missing an eye it’s fine too – pol. o jednym oku, byle tego roku) and therefore many choose to hide their true needs.

Because of the abovementioned, Tinder is generally considered to be an acceptable dating application. After all, most of people using it are only checking it out, looking for new friends or purely interested in hook-ups. Nearly none of the users admits that they may be looking for something serious. The effect is that Tinder ends up being full of women with aspirations of finding their husbands and men looking for a pleasurable pastime that wouldn’t require too much commitment (due to reasons such as wife ownership or commitment phobia). After all, if the person turns out to be too demanding, there are many others willing to be swiped right and who won’t be silly with their needeness for respect.

Maybe it’s bad Tinder experiences that bring people to dating websites, maybe not. Whatever it is, the number of people using them is overwhelming. As an attractive woman one gets so much attention its creepy and let’s be honest, most of this attention is of low quality with “hi sexy” and similar opening lines. Sometimes, however, a true gem can be found among all the superficial spam. Someone with whom we can chat for hours before we eventually meet them to learn that there’s also chemistry (which is a much better order than attraction first, thinking next – pol. od dupy strony). Maybe this is the reason why via Internet dating we can end up in a solid relationship – it just seems that there are better chances of having something real with someone who has the gutts to say that they’re looking for a true and lasting connection. And if we do end up working out with this person who can ever judge us for how the story started?